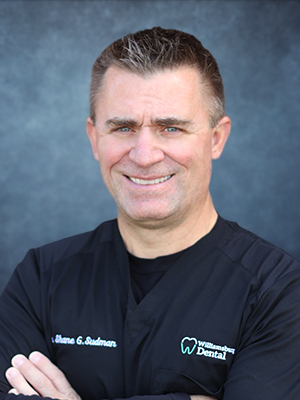 Dr. Sudman was born and raised in Nebraska City, Nebraska. He started working at an early age on my Grandfather's farm and his other grandfather's roofing and siding business. When he was around 12 years old, his mother asked him what he wanted to be when he grew up. He immediately said he wanted to be a dentist. No one in his family was a dentist and no one in his family had gone to college.

He graduated from high school in 1991 and went to University of Nebraska-Lincoln for his undergraduate degree and began pre-dental studies. After three years of undergraduate pre-dental studies, he was accepted into University of Nebraska Medical Center College of Dentistry in 1994. He graduated from UNMC Dental School in 1998, and then moved to Chicago. He completed a one year Pierre Fauchard Academy fellowship in a private group practice in 1999. After completing the fellowship, he became an associate at a private practice on the Southwest side of Chicago. He practiced and owned his own dental office for over 20 years in the suburbs of Chicago while living in the city of Chicago. He then moved back to Nebraska after having children to be closer to family.

Dr. Sudman has two daughters Belen and Shay. When he's not working, he enjoys working out, golfing, waterskiing, boating, snowmobiling, snow skiing, and spending as much time with his daughters as possible. Something you wouldn't know about Dr. Sudman, he is a Metallica fan and has two tattoos of his daughters' names on his arms. He really enjoys being a dentist and can't imagine doing or being anything else.