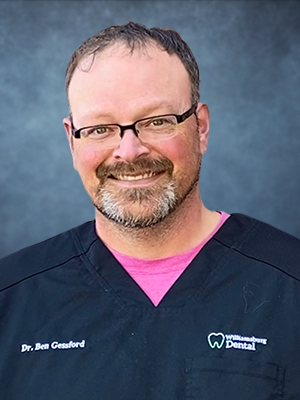 Dr. Ben Gessford was born and raised in Lincoln, NE and graduated from Lincoln East High School in 1994. Dr. Gessford then went on to earn undergraduate degrees in Psychology and Biology from the University of Nebraska-Lincoln. Dr. Gessford was a proud member of the Nebraska Cornhusker football team from '94-'98, helping the team win 3 national championships as an offensive lineman. Dr. Gessford joined the football team as a walk-on, and through hard work, eventually earned a scholarship and a starting position at right guard.

Dr. Gessford graduated from Creighton University School of Dentistry in Omaha and began practicing dentistry in Kansas City. As a graduate of one of the best private dental schools in the nation, he is truly exceptional in all aspects of general dentistry.

In 2007, Dr. Gessford and his wife Colene moved back to Lincoln. They have 2 beautiful boys: Miles and Caleb. Away from the dental office, Ben enjoys spending time with family, movies, fishing, skiing, running, and of course, Husker football.